Small handmade boxes have a charm all of their own.  They were often made as a labour of love to be given as a special gift to a loved one.  This is most certainly the case for at least two of these boxes and in some way for one of the others as well.  I will share their stories as best I can as I know the history of three of these boxes but can only speculate as to the origin of the last one. 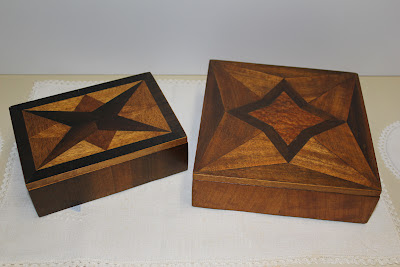 The first two boxes were made by my father well over 60 years ago.  I have already featured the first box in a previous post about Mum's Treasure as it was my mother's jewellery box.  Dad gave it to her before they were married.  The second box box was made for Dad's sister, my Auntie Joan, and was probably intended to be handkerchief box.  Both these boxes are fully veneered, inside and out, with different types of wood.

Not sure what different veneers Dad used on these boxes except for the silky oak in the centre of the handkerchief box.  The dark veneers are probably some type of walnut and I expect some of the other lighter ones to be maple (maybe even Queensland maple).

The next box is not quite as old.  It is actually one that I made in high school in woodwork class about 45 years ago.  My Mum used it as a jewellery box as well.

I made this jewellery box from silky oak (not that I had any choice of material - just used what the teacher gave me).  Silky oak is not really a favourite timber of mine though I have really come to appreciate it more and more over the years.  We probably have more pieces of furniture in our home made from this timber than any other, except for pine.   The desk I sit at each day for work is made from silky oak as is the set of pigeon holes that sit on it.  My favourite Australian native timber, however, is still red cedar. 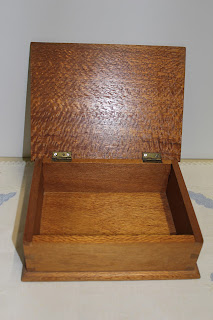 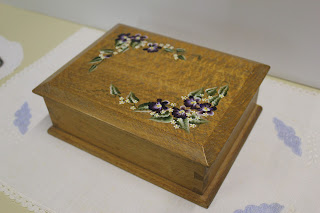 I think this box was still unfinished when I gave it to my Mum all those years ago and I believe that it was my Dad who polished it up using Danish Oil or some other similar product.  It remained in an unadorned state for about half of its life when my Mum asked me to folk art it for her.  I had been taking folk art classes and so took it home to paint.  The box sat around home for quite a while before I finally got the courage up to have a go.  I chose a violet pattern to adorn this jewellery box as it was my Mums favourite flower.  In the end I was rather pleased with the result and so was Mum.

The last of the four boxes is probably the most unusual in shape, construction and origin but certainly is an interesting piece of Australiana.  I acquired it from a friends stall at my Bottle and Collectables Club Christmas Breakup Show.  I was told that it was found at a flea market many years ago by his father-in-law.  It was now time to move it on and I was happy to oblige by taking it of his hands.

It is made from both silky oak and red cedar, quite an unusual combination of woods.  The lid is silky oak while the base and body of the box are made from red cedar.  Both the lid and the body are made of two pieces skilfully joined down the middle whereas the base is one single piece.  The base almost looks to me as though it has been put on upside down as the chamfered edge runs under the box.

The lid is also decorated with what looks like the initials "a w",  some small bunches of cherries (?) in each corner as well as some other decoration.  This looks as though it may have been drawn on in pen as there doesn't seem to be any evidence of engraving from pokerwork. 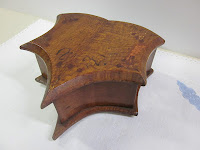 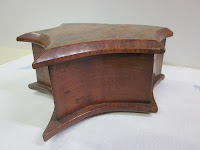 The interior of the box also clearly shows the unusually thick cedar walls.  Each side would have been cut from a single solid block of wood.  This would have then been cut into two pieces that were mirror images of each other and then rejoined to create this fancy shape.  Rather quite a lot of work for a little box.


Who made this piece?  Why was it made?  How old is it?  Was this an apprentice piece or maybe a school exercise like my silky oak jewellery box?  Why did they use silky oak for the lid and not more red cedar?  Why put the base on as they did?  And who is "a. w."?  All questions that most likely will never be answered but are fun to ponder.
Posted by Johnnyfive Collectables at 3:00 pm