This first vase is another Dayboro Day Antiques & Collectables Fair find.  I was first attracted to it by the colours which looked to me very much like what you would expect to see on mid 20th century Australian pottery.  Upon examination I discovered it to be an example of Diana pottery.  I didn't know much about this pottery except that they produced many different vases as well as kitchen ware that was decorated with dots.  I liked the colours so asked the stall holder how much it was.  The price seemed reasonable so I purchased my first piece of Diana ware.

This vase was made by Diana Pottery in Marrickville, NSW, probably in the 1950s.  This type of slip cast vase is known as a "trough" vase.  Diana Pottery was in business from about 1940 to 1975.  They began by making utilitarian items during the war, then more decorative items such as vases, bookends and animal figures in the 50s as well as producing a range of decorated oven and kitchen ware. Diana Pottery is considered to be the most important manufacturer of Australian pottery of the 1960s and 70s.

Diana pottery is still readily available and often turns up in antique & collectables fairs.  It makes a great introduction into collecting Australian pottery.  You may even be able to pick up some pieces for under $10 if you are lucky.  More information about Diana Pottery can be found on the Australian Pottery website by Sam Kelly. 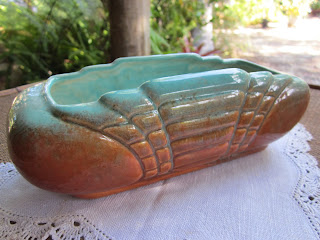 The second vase is one that my wife gave to me as a present last Christmas.  It is a drip glazed canoe shaped trough vase made by Bennett Pottery of Adelaide. 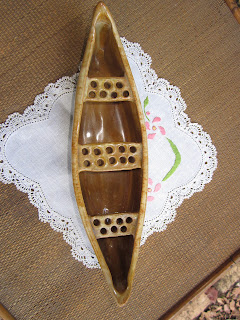 I had seen this actual vase for sale a number of times at different collectables fair over the past year and had even discussed buying it from the stall holder (who I knew from my Bottle and Collectables Club).  Each time I couldn't make my mind up to buy it or not.  I'm glad Karen finally decided to buy it for me.

We had seen many similar vases to this one when we lived in Melbourne.  Each antique centre seemed to have one or two somewhere on a shelf.  It almost became an ongoing joke for us as each time we saw one we would say something like "Look! There's another canoe vase."  I am not sure if any of these vases were from Bennett Pottery but I am sure that some were from Bendigo Pottery.  Wish I had bought one now although I don't remember them being as good quality as this Bennetts one.

Bennett Pottery was founded in 1887.  The Bennett family still operate the pottery on the same site today.  Take a look at the current Bennetts Magill Pottery website.  The company manufactured art pottery only for a short period of time from the 1920s up until 1940 when the pottery suffered a serious fire.  I believe this vase dates from this period.  Glaze specialist Jack Gare worked at Bennetts during this time and it is most likely one of his glazes that adorn this canoe.  Gare had previously worked for Bendigo Pottery until he was sacked for not being willing to disclose his special glaze recipes.

Posted by Johnnyfive Collectables at 7:33 pm