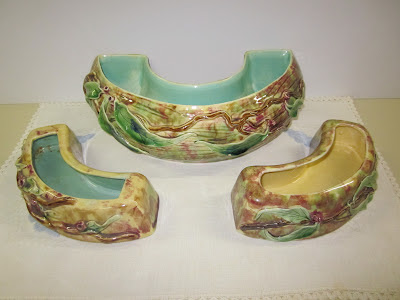 Here are some more of my treasure finds from the Caloundra Show.  I had been looking for a vase like this for sometime now and was surprised to find three all together on one stall.  My intention was to only buy one of the small ones but the persuasive stall holder (also a friend of mine) offered me the three at a price I couldn't resist (aided by some prompting from his good wife).


These handmade, pottery vases were most likely made by one of the Sydney potteries in the 1940s - 50s.  Not sure I will ever be able to find out which one as none of them have any identifying marks.  Each of them have some applied branches, gum leaves and gumnuts on a sponged background.  The large vase is also modelled as a large branch with strongly impressed graining.


The large vase has a few small chips to some of the leaf edges and a small chip to the rim.  This is not surprising as this type of decoration on pottery is extremely vulnerable to damage.  Thankfully the damage is not too obvious due partly to the intricacies of the decoration.

The smaller vases below are moulded differently to the large vase but still include very similar applied decoration.  The decoration on the vase with the yellow interior is very similar to the large vase's decoration whereas the other small vase has the same blue/green colour interior but slightly differently modelled leaves.  I suppose it just depends on which potter did which part of the decorating process.


Each of the small vases also have some very minor nibbles to a couple of leaf edges though these are extremely hard to see.  Overall the condition of the three vases is extremely good considering their raised decoration and age. 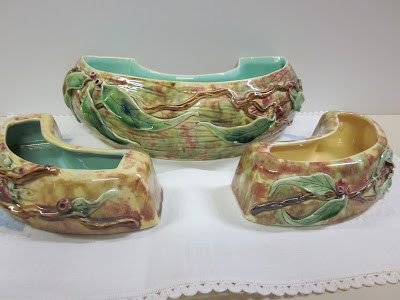 Posted by Johnnyfive Collectables at 4:54 pm