I bought my vintage hay rake just over three years ago. It wasn't something that I was specifically looking for at the time but it was something that I had always admired. I just loved the sculptural lines that the row of tines made.


So when I saw a nice one for a great price on eBay, I just couldn't resist putting in a bid. And surprise, surprise, I won it. Thankfully, I had contacted the seller prior to bidding to discuss the cost of having it delivered. So I was able to factor this cost into what I would be prepared to pay. It actually cost me more to have it delivered than it did to buy it. Overall though, it still came in at a very good price.


The hay rake came from a property at Fernvale, west of Brisbane. And so began its journey to its new home in my backyard. The seller delivered it on a large trailer. He had loaded it on at his end with his tractor. Unfortunately we didn't have the same luxury at our end. But with a bit of help from my son and a couple of friendly neighbours we managed to get it safely off the trailer. Getting it down the driveway, through the carport and into the back yard went reasonably smoothly except for one hiccup. One downpipe ended up needing a bit of panel beating later. At least the hay rake rolled very well and it just fitted through the carport with a few millimetres to spare on each side. So my hay rake had safely arrived in its new home. 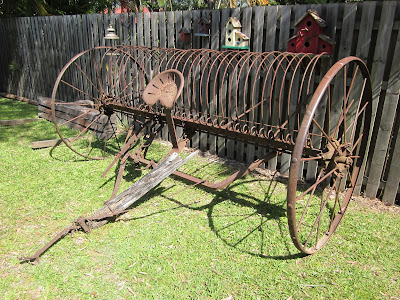 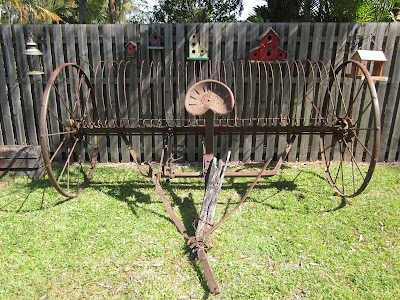 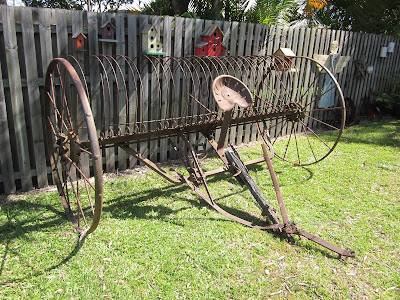 It was missing its tractor seat but that was OK as I just happened to have one lying around.

So began three years of having to move my hay rake every time I wanted to mow the lawn. I didn't mind though as it always rolled easily and looked so good when I put it back in place on the freshly mown grass.


The hay rake became a popular perch for the local birds when they dropped in to get a free feed from my bird feeders. Sometimes they would hop from one tine to another leaving the tines quivering away when they flew off. 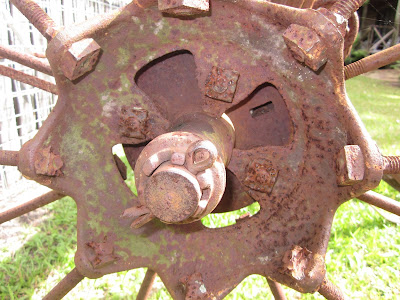 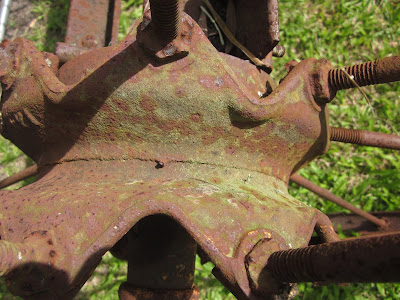 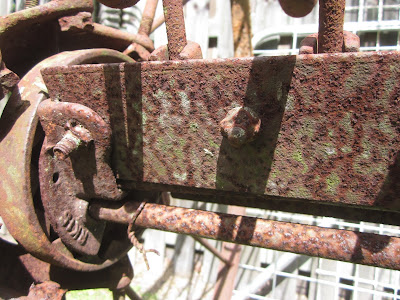 Over time I really began to appreciate and enjoy the various colours of the rusty metal and green lichen that had decided to grow on the hay rake. But the time had come for me to say goodbye to my beloved hay rake. I advertised it on Gumtree and it eventually sold to a nice guy who only lived about 10 kilometres or so away. It was to become a centre piece for a new garden that he had just created on his own property. 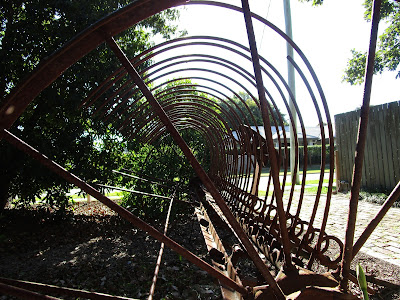 The crane truck made quick work of loading the hay rake. Very easy when you have the right equipment. And then it was time to say goodbye as the truck drove away up our street.

And so ends the saga of my beloved hay rake!

Posted by Johnnyfive Collectables at 10:44 pm No comments:


Johnnyfive Collectables now has its very own Facebook page.

You can now find us at https://www.facebook.com/JohnnyfiveCollectables/?ref=bookmarks as well as here at this blog. This Facebook page will provide you with links to the items that I will be selling on Gumtree, eBay and my Etsy store. Please check it out and like my new page.

I'm currently in the process of downsizing some of my collections so you may see some items for sale that have previously been featured in my blog posts. This could be your chance to pick up some new items for your own collection. Below are a few photos of some of the great items that are currently available.

Lots more photos are shown on Gumtree.  Please feel free to contact me with any questions or follow the links on my Facebook page to the adds on Gumtree.

Posted by Johnnyfive Collectables at 11:28 am No comments: