I have had the good fortune of picking up some baby feeders from Bulgaria over the last few years.  They may not be to everyones taste (my wife doesn't like them at all) but they certainly make an interesting addition to my Baby Feeder Collection.  I think my wife's main concern about them is that they would be almost impossible to clean and therefore completely unhygienic.  But this was often the case with many early baby feeders.  It's no wonder the infant mortality rate was so high in the 1800s. 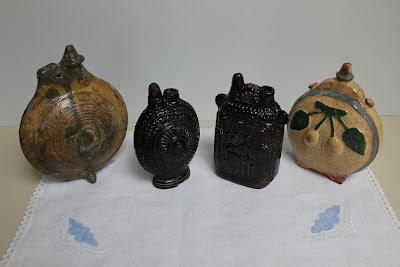 The two dark brown, small ones in the centre are probably the oldest and would most likely date from the middle to late 19th century. These are both made out of what is called redware pottery.  Redware presumably because of the red ochre colour which is clearly evident where a few chips have occurred.  They both stand approximately 14cm tall. 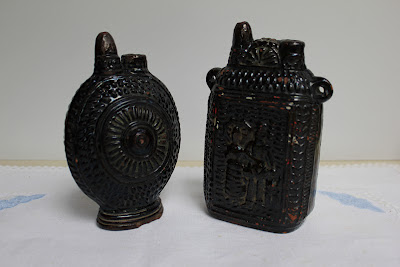 The rectangular feeder has an image of a man, woman and dog moulded into the pottery on both the front and the back.  I have seen an identical one advertised as the picture on it being of the holy family, i.e.. Mary, Joseph and the infant Jesus but I am sure that this is incorrect.  Maybe they thought what I believe to be an umbrella around the woman's head was a halo.  And I am definitely sure that the small creature on the right is an animal as it appears to have four legs and a tail.  There is also evidence of some red and white paint or colour on the frame around each picture as seen below.  This feeder also has two loops which could have once had a cord threaded through them. 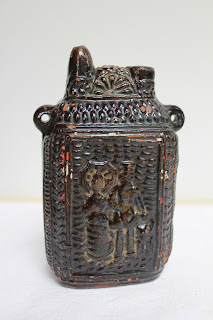 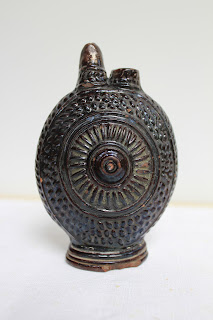 The oval feeder is more simply decorated with a round shield on each side surrounded by a textured moulding.  There appears to be what looks like some remains of paint or colour on these shields.

The two slightly larger feeders were listed as being made of redware, yellowware pottery (what ever that means) although the plain brown one looks more like some form of grey pottery material.  The plum decorated feeder is most definitely redware as can be seen in the photos.  The somewhat larger size of these feeders leads me to believe that they could have been used for a larger child or perhaps as invalid feeders.  The plum feeder stands approximately 15.5cm tall and the other stands approximately 18cm tall. 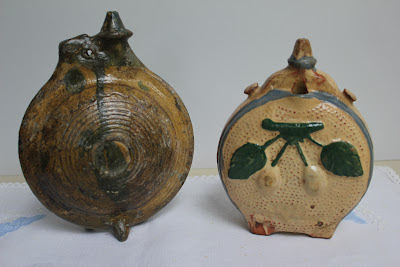 The plum feeder is supposedly from the late 19th century however I suspect that it could really date from the early 20th century.  The decoration is unusual in that it has been painted nicely but with no colour on the plums.  Maybe they aren't plums and they are actually a fruit that is the same colour as the background colour.  Not sure what fruits are grown in Bulgaria.  This feeder also has two lugs that would have enabled some cord or strap to be attached.  I don't think I would like to trust hanging this up from those lugs.  The filling hole is clearly shown in the photo above.  It stands firmly on four small feet. 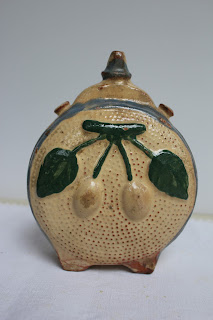 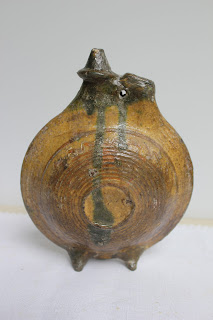 The other feeder, the largest of the four is rather plainly decorated in a brown and yellow glaze with a green drip flowing from the top.  It also has a zig-zag line circling the concentric circles on each side.  This is just visible in the photos.  There is a single hole between the spout and the filling hole that is probably meant for a cord.  The filling hole on this feeder is extremely small (barely 3-5mm wide).  I imagine that this would make it very hard to fill and could easily get blocked.  The other three feeders filling holes are all at least twice the size.  Maybe this feeder was only used for water.  It stands on three small feet and tends to be a little unstable, leaning towards one side.  This feeder was acquired as being from the early 1800s but from its great condition, I wouldn't be surprised if it is more likely from the late 19th to the early 20th century.  Maybe someone can help with the dating of these feeders.  If so, please feel free to comment.

Posted by Johnnyfive Collectables at 1:57 pm