Up until earlier this year, the only jelly moulds that I had in my collection of kitchenalia were two clear glass moulds that I found at the Dayboro Day Antiques and Collectables Fair two years ago.

Then I recently managed to pick up four more moulds for my collection from an Aladdins Collectables Fair. This time they were all white pottery rather than glass. I had always wanted some white pottery moulds and had often looked at them in antique shops but they were always to dear for me.


And even more recently I have acquired three more, bringing my current total to nine. Two of these latest ones are white pottery bought from the Sunshine Coast Antique and Collectables Show last month and one is brown salt glaze stoneware bought from Collectorama in Nambour a week ago. 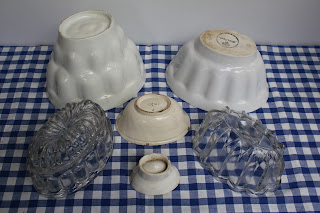 The age of these moulds vary quite considerably. I can only estimate most of their ages, however the two T. G. Green moulds are a little easier to date more precisely.

Beginning with what I believe to be the oldest jelly mould is this small Victorian one. It is impressed on the base with No. 25, 5 and a small star or flower mark. I suppose these are the pattern number and size of the mould. It does however have a few chips and a hairline crack. 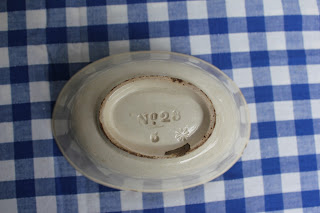 Next is another very small, early mould but this time from the Wedgwood factory, probably also from the Victorian era. It is impressed on the side with "WEDGWOOD", 24, 31 and the letter H. Again I assume that the numbers represent the pattern and size. Unfortunately this mould has a rather nasty chip and crack. I only bought it because I had never seen a small Wedgwood mould like this and the price was reasonable considering its poor condition. 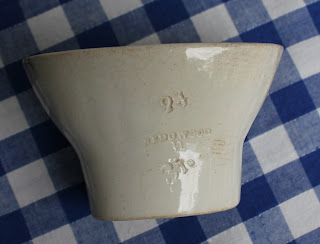 I believe that the next two moulds could be late Victorian or Edwardian.  The first one is quite a large mould that stands about 14cm high. This would make one impressive jelly. This mould doesn't have any identifying makers marks but at least it is in good condition with just a bit of crazing.

Next is another large mould that is over 23cm in diameter but only 7cm deep internally. It is nicely decorated inside with a pattern of grapes, leaves and other fruit. Again, a jelly or what ever else that would come out of this mould would be most impressive. This mould is clearly marked in green on the base by a circle surrounding the letters V&B over an M. It also has a rather indistinct impressed mark of what I think is "No 249", the letters JH over the number 37 and possibly the number 1 on the side. There are also two holes in the foot rim of this mould enabling it to be hung on the wall for either storage or display. This mould is in very good condition with only a small chip on the rim. 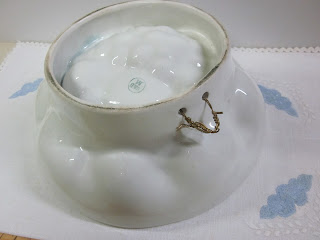 My most recently acquired jelly mould is a lovely, glossy, brown, salt glaze stoneware mould.  It has no markings identifying where it was made but looks very similar to the Bendigo Pottery products (although it could have been made almost anywhere). Dating this mould is rather difficult as it could have been made as early as the mid Victorian era or right up to the early 20th century. Its condition is very good with it only having a few small chips. 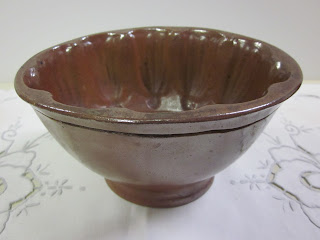 The two glass jelly moulds would be more recent than the previous five moulds, probably early to mid 20th century. They are both unmarked and in good condition except for a chip and fracture mark in the first more decorative one. I knew it had a chip but didn't even notice the fracture when I bought it. I was a bit disappointed to find it when I got home. It goes to show that no matter how hard you exam an item before buying, you can still make mistakes. The lighting is not the best around some of the stalls at Aladdins Fair where I bought it from. If you are paying big money for an item, it really should be examined in bright, natural sunlight. Thankfully the stall holder had this mould very reasonably priced which I now understand was due to its condition. When I think back, this mould may have even been marked A/F which usually means "as found". It is a sellers way of letting you know that this is the condition that they got it in. Always examine any item marked A/F very carefully before buying.
Both these moulds probably came from the Crown Crystal Glass Company. This Sydney based company was formed in 1926 and produced glass wares up until the late 60s. It eventually merged with the American company Corning in 1972 to become Crown Corning. 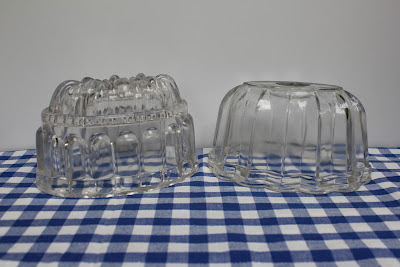 The last two jelly moulds are both from the company famous for its blue and white Cornishware range, T.G. Green & Co. The first smaller jelly mould is fairly plain and has an early GREEN & Co LTD, GRESLEY, ENGLAND with church mark on the base. I believe this jelly mould would date from the 1930s. 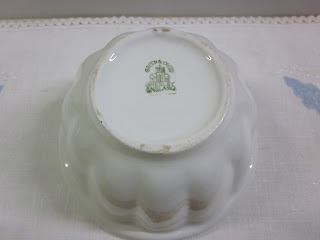 The following jelly mould is the last in my collection and most definitely the youngest in age. It is quite a decorative and good sized mould. It's from the T. G. GREEN LTD "SPECTRUM" series of wares and would date from the 1970s to 80s. Not really very old. I wouldn't normally include an item as late as this in any of my collections except for it being from a well know maker. 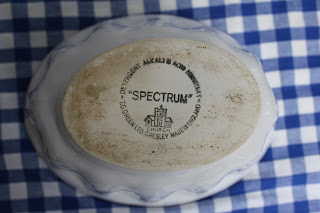 Well that's my jelly mould collection. I suppose it is now time for me to go and use some of them to make some jellies and see how they actually turn out. Who knows, I may just feature the results in a future post. So fellow collectors, stay tuned for part 2 of "My Vintage Jelly Mould Collection".

Also, as usual, I would appreciate any helpful comments about the items that I post, especially about their age and company of manufacture. Hopefully I will be able to learn a little more about them.

Posted by Johnnyfive Collectables at 12:42 pm