Above is a photo of just part of this collection and below are some photos of some of the individual plates. 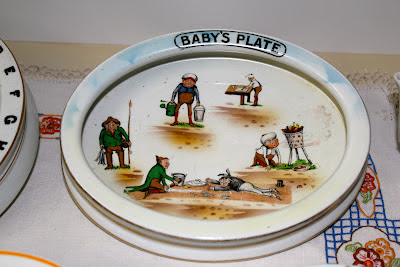 I found this plate in an antique shop in the northern suburbs of Hobart, Tasmainia while on holidays last year. It is made by the English company "GRIMWADES" at Stoke On Trent in 1900-10. It features a group of little brownies playing harmless pranks and also trying to do good deeds for some humans. I particularly like the way that the blue sky and white clouds continue over the edge of the plate. There is another similar brownies plate, although round instead of oval, also available from this same company.


Next is a round baby's plate featuring decoration by Mabel Lucy Attwell. 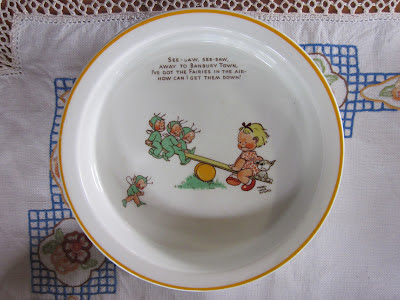 I bought this plate on eBay last year from a Queensland seller. It is made by that well known English company, "Shelley", and would date from about 1930-40. Mabel Lucy Attwell was very well known for her drawings of little children with rosy cheeks playing with fairies. These fairies are also known as 'Boo Boos'. She decorated many items with them for the Shelley company. This plate features a rhyme explaining the predicament the little girl is in with the see saw. Apparently fairies are a lot lighter than a small child, hence the fairies being stuck up in the air on their end of the see saw. 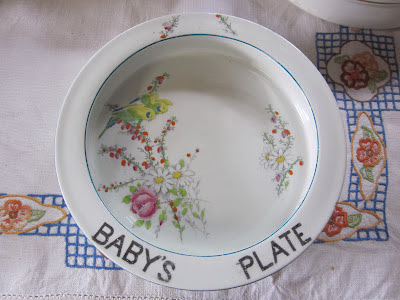 I found this baby's plate on a stall at Collectorama last year. It doesn't look like a royal commemorative item until you turn it over and read the backstamp. You then see that it was produced to commemorate the birth of Princess Margret Rose, Queen Elizabeth II's younger sister, on the 21st of August 1930. At least this makes the plate easy to date. The plate is made by another English company named Paragon China. Apparently, Paragon started labelling some of their better quality china as Royal Paragon China before they were actually granted a Royal Warrant to do so. Their first Warrant of Appointment was not granted until 1933. This plate features a pair of budgerigars amongst some sprays of flowers. Not sure if the budgerigars or flowers have any royal significance. The decoration is a grey transfer print that has later been hand painted. 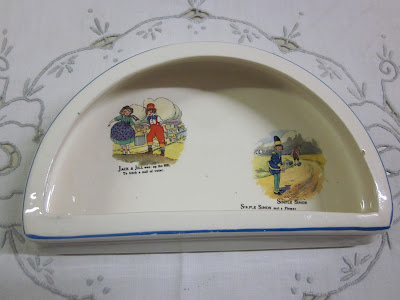 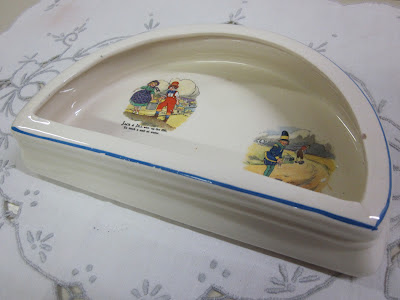 This plate was only found by me a week or so ago at an Aladdin's Fair. I was taken with the unusual shape for a baby's plate so had to buy it for my collection. I haven't seen another quite like it. I usually don't make a practice of buying damaged items. This plate does have a small chip on the rim but was reasonably priced and unique enough to make an exception. This is yet another plate from an English company, this time H & K Tunstall. This Staffordshire pottery was in production from 1870 to 1956 when it was incorporated into the Johnson Bros group. According to the unicorn backstamp, this plate would date from between 1933-42. It features two nursery rhyme pictures, Jack & Jill and Simple Simon.


Stay tuned collectors and I will feature some other baby's plates and cups in a future post.


Posted by Johnnyfive Collectables at 3:51 pm