Seems that mankind has been bothered by flies ever since time began. On the positive side, this has led to  the invention of a number of different fly traps or fly catchers. Probably of most interest to collectors are the glass fly traps that were popular during the 19th and early 20th centuries. I have two different ones in my own kitchenalia collection. 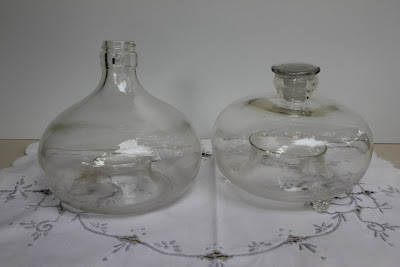 The fly trap on the left is an "AGEE FLY TRAP". This trap was designed to be hung by a wire handle so the flies could enter by the large hole in its base. The flies, being attracted by some sweet liquid or other bait in the bottom of the trap, were then unable to find their way out. Apparently flies aren't too bright and tend to try to escape through the glass rather than flying down through the open hole. My Agee fly trap unfortunately no longer has either its wire handle or metal screw cap. This Agee fly trap dates from the early to mid 20th century and were machine moulded. A wire stand was available for this trap to enable it to be used standing on a flat surface such as a table.


My second glass fly trap is a lot older, probably dating from the late 19th to the early 20th century. It works in much the same way as the Agee trap but is specifically designed to stand on its glass feet. These feet elevate it sufficiently to allow easy access for the flies. The sweet bait is usually put into the base of the trap however I have heard of it being used by placing the bait directly on the table under the trap. Either way, the flies still get trapped as they fly upwards and can't escape. The loose fitting glass stopper (not the original) can easily be removed to facilitate emptying out the dead flies and cleaning the trap. This trap has been free blown and displays many irregularities in the glass.  These irregularities certainly give it a lot of  character.


If I could add just one other fly trap to my collection, it would be the one pictured below that I saw last year while holidaying with my wife in Tasmania.

This amazing blue glass fly catcher is part of the collection of the "Narryna Heritage Museum" in Hobart. This historic house and museum would have to be one of the best I have ever seen. It is noted for its costume collection which is one of the largest in the Southern Hemisphere. The costumes are simply stunning and I can't recommend a visit to Narryna highly enough.

If all else fails in the eradication of those pesky flies you can always resort to good old poison administered by that faithful old kitchen stand by, the pump action fly sprayer.  Along with my glass fly traps I also have a "CAMEL" and a "MINIT" fly sprayer in my kitchenalia collection.

The "CAMEL CONTINUOUS SPRAYER" was MADE IN HONG KONG by WANG ON MANUFACTURER and is noted as being SUPERIOR QUALITY.  It has a British Patent No 914275 printed on it. This sprayer would have been made in Hong Kong when it was still under British rule. It has a wooden handle and great graphics of a camel in front of two pyramids and some palm trees. It also has a CAUTION note to say DO NOT SPRAY INTO OR NEAR AN OPEN FLAME. Probably very sound advice.

The "Minit" sprayer is a bit faded but still has a nice wooden handle. This sprayer doesn't have a lot of information printed on it apart from the brand "Minit, MADE IN AUSTRALIA and a note to tell you to OIL OCCASIONALLY with an arrow pointing to the oil hole.


While researching fly traps for this post I came across a couple of items of interest. The first was that you can still get glass fly (or wasp traps) today. Take a look at this pretty coloured glass wasp trap available from "earth easy ".

Most glass fly traps seem to be called wasp traps now. Wasps seem to be a bigger problem these days than flies and I would probably agree with this as I remember my own experience in Victoria with some very annoying wasps. What started out as a pleasant picnic with my family at Sylvan Dam tuned into "the attack of the killer wasps" thanks to my eldest son. He accidentally (or at least he said it was an accident) knocked over the bottle of Coke on our picnic table and all over me as well. Wasps love sugar so I was a prime target for them. Needless to say I wasn't very happy with my son or my new found wasp friends (and these were European Wasps as well). I ended up spending the rest of the picnic locked safely away in our car.

I also came across this amazing collection of hanging fly traps that had been for sale on eBay some time ago.

And finally I found out some interesting facts about the song "Shoo Fly, Don't Bother Me". It is believed to have been first published in 1869 by White, Smith & Perry. It was commonly sung by soldiers during the Spanish American War of 1898 because of all the flies and yellow fever mosquitoes. Also, the lyrics of the original song have been changed as it included the term "nigger" which is considered offensive today.

Posted by Johnnyfive Collectables at 9:40 pm