Thought I would share with you one of my favourite antiques from my own collection. It is a complete set of 32 volumes of the Handy Volume "Waverly" Edition of Sir Walter Scott's Novels housed in it's own miniature bookcase. 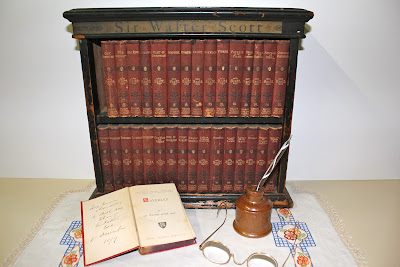 It would be about 40 years ago now when I found this set of books for sale at Lloyd's Bookshop in Elizabeth Arcade in Brisbane city. I believe the bookshop has now moved elsewhere. I just happened to be browsing through this shop one lunch hour when I saw them sitting on a shelf for just $18. This seemed like a pretty good buy even 40 years ago but still quite a lot for a teenager (as I was then) to spend on some old books which I would probably never read. But I had very quickly fallen in love with them so I decided I must buy them. I didn't have the full amount on me so opted to put them on lay-by with a $6 deposit. When I got back to work I couldn't stop thinking about the low price of the books as I felt that they were worth a lot more. I started to get concerned that if I left them on lay-by for too long the bookshop owner may try to renegotiate the original price when it was time to pick them up (not that I really believed he could legally do so but I didn't want to push my luck). So that same afternoon, I got some money out of my bank account, paid for the books in full and took my new found prize home.

When I first saw the books in the bookshop, I noticed that the first volume, "Waverley", was inscribed and dated 1879. Assuming that they would have had to been published some time earlier than this date, this would make them getting on towards 100 years old even back then. Now of course they are at least 133 years old. Definitely a true antique according to the accepted Australian terminology of an antique being something at least 100 years old.

The inscription in the first volume reads as follows:-

The surname is really only a guess as it is rather illegible to me. Anyone got any other ideas as to what the surname may be? There are no other dates on these books that I can find.

It would be very interesting to know more about the original owner. How old was Lucy when her Father gave her these books as a gift? Where did she live? Was this a family treasure kept for many years or has it had many owners in its lifetime? How cool would it be to actually meet one of Lucy's descendant? I can only live in hope. 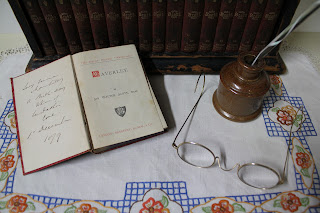 The Waverley Novels are a long series of books by Sir Walter Scott. For nearly a century they were among the most popular and widely-read novels in all of Europe. Because he did not publicly acknowledge authorship until 1827, they originally took their name from his first novel "Waverley" which was published in 1814. Later books were known to bear the words "by the author of Waverley" on their title pages. More loosely, the term Waverley is used to refer to all of Walter Scott's novels.
Sir Walter Scott is credited as inventing a brand new style of literature that was to become the archetype of the historical novel throughout the world. This series of books was to influence generations of writers and earned Sir Walter Scott his well earned reputation as the founder of the historical novel. Some of his best known works include "Ivanhoe" and "Rob Roy".

Posted by Johnnyfive Collectables at 9:21 pm