My collection of Diana ware pottery has grown from one piece to five over the past month. I just love the colours in the glazes they used. Looks like another collection looming.

The two wall pockets were obtained from the last Collectorama fair. I bought these both from the same seller. Apparently she'd had them for quite some time and these vases had travelled to England and back with her when she had lived there for awhile. 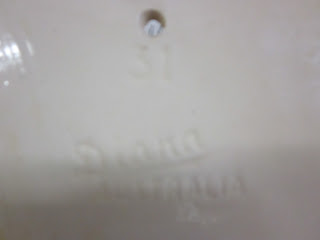 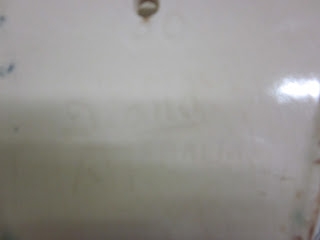 This type of vase was made to hang on a nail or hook on the wall, hence the name wall pockets. I wonder how many fell of the wall over the years. In truth, they are probably safer hanging on the wall than other vases were standing on a shelf or table. Both these vases share the same glaze.

The oval posy ring vase was bought from the latest Alladins Fair. I love this sweet little vase. 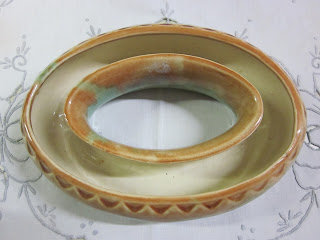 I nearly didn't buy this vase as it has no identifying marks on it and this area of collecting was very new to me. I was fairly sure it was Diana when I was looking at it as the colours were very typical of Diana pottery glazes. So I took the chance and bought it. I have since seen the exact same vase identified a number of times as Diana pottery. Glad I went with my gut feeling.

The last piece of Diana pottery is an oval bowl, maybe a fruit bowl also found at the same Alladins fair. 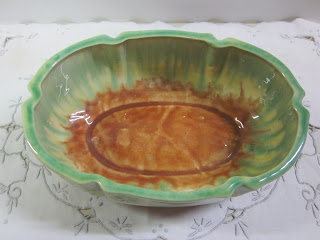 This piece has the same glaze as the posy vase, only the colours have been reversed this time. I have seen a lot of Diana ware that has the same glazes in a variety of combinations. They all differ a little as they were hand done.

All these vases would date from the post World War II period, probably the 1950s. These pieces of pottery look good displayed together as the consistent colours and glazes compliment each other. Sometime I will have to set them all up somewhere and take some photos for a future post.

Posted by Johnnyfive Collectables at 5:05 pm