Two chronometers the captain had,
One by Arnold that ran like mad,
One by Kendal in a walnut case,
Poor devoted creature with a hangdog face.
Arnold always hurried with a crazed click-click
Dancing over Greenwich like a lunatic,
Kendal panted faithfully his watch-dog beat,
Climbing out of Yesterday with sticky little feet.
Arnold choked with appetite to wolf up time,
Madly round the numerals his hands would climb,
His cogs rushed over and his wheels ran miles,
Dragging Captain Cook to the Sandwich Isles.
But Kendal dawdled in the tombstoned past,
With a sentimental prejudice to going fast,
And he thought very often of a haberdasher's door
And a yellow-haired boy who would knock no more.
All through the night-time, clock talked to clock,
In the captain's cabin, tock-tock-tock,
One ticked fast and one ticked slow,
And Time went over them a hundred years ago.
by Kenneth Slessor, 1931.

Who remembers this poem from their school days? I do. I still have my Anthology book from Grade 6 (at least I think it was Grade 6) with it in. Gee, that would be at least 45 years ago now! 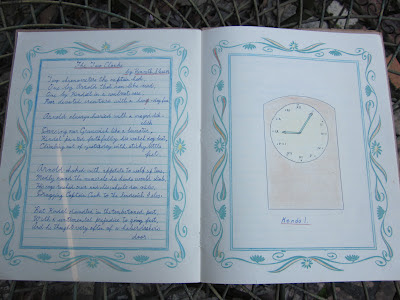 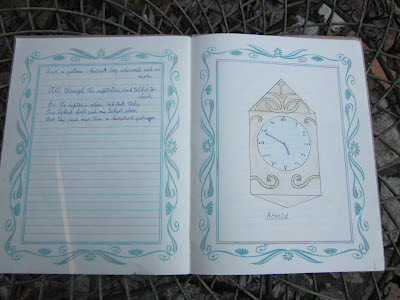 It is an excerpt from Kenneth Slessor's 1931 poem, "Five Visions of Captain Cook", about Cook's third voyage chronometers.

Well, Arnold and Kendal came to live at our house last year. At least that is what I call our two American mantel clocks. I can't help thinking of Kenneth Slessor's poem when I look at them. You see, one always seems to 'run like mad' while the other just keeps on 'panting faithfully'. Just like the two chronometers in the poem.


We found the first clock, our American steeple clock, on a stall at the Pomona Antiques and Collectables Fair last year. This fair is on again in just two weeks time. We were spending a day out with my Brother, Sister-in-law and Niece going to the antiques fair, having lunch together, seeing a silent movie at the Majestic Theatre and visiting the Pomona Museum. Overall it turned out to be a most enjoyable day. 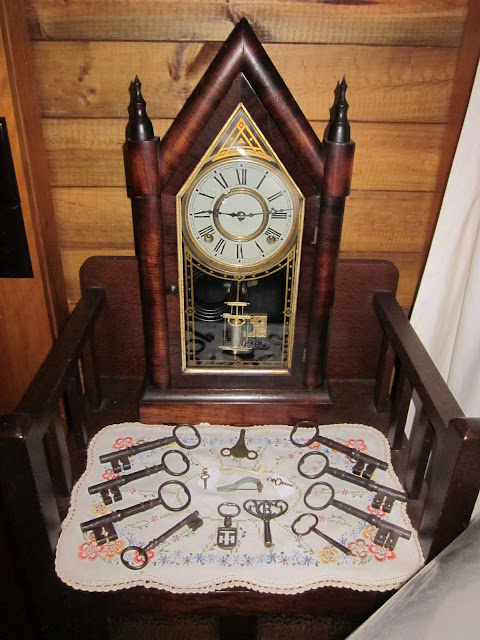 I had always admired American steeple clocks and here was one for sale. They have always seemed to me to be the perfect, country, cottage clock. A style I have always admired. Hadn't planned to actually buy a clock this day but thought we would have a look anyway. The stall holder, Ken, turned out to be a really nice guy and was only too willing to spend time with us explaining everything about the clock. He collects, restores and sells clocks and is a member of the Queensland branch of 'Watch and Clockmakers of Australia'. This clock was part of his own collection but as his collection grew so some clocks had to go. Thankfully for us, it was his steeple clock. So a deposit was paid and we picked the clock up from Ken's home the following week.

This clock, which I call 'Kendal', is a nice example of an American steeple clock made by the E. N. Welch Clock Company in Forrestville, Connecticut, USA. The company was formed in 1864 and was eventually taken over by the wealthy Sessions family in 1903. They changed the name of the company to the Sessions Clock Company.
Kendal is in very good original condition and like his namesake pants 'faithfully his watch-dog beat'. He has an eight day movement, chiming the hours and half hours, housed in a handsome rosewood veneer case. This clock would date from the late 1800s.


Our second clock was also bought from Ken, who I am proud to now call my friend, when he had a stall at the Queensland Historical Bottle and Collectables Club's Annual Show last September. We were looking for a black Sessions or Ansonia mantel clock and Ken just happened to have one for sale. It was well priced so it had to come home with us. 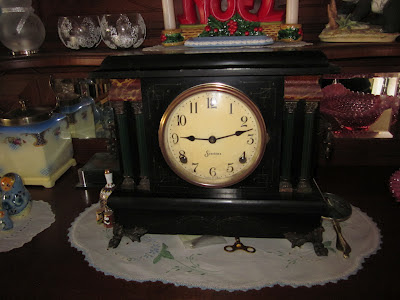 I have named this clock "Arnold" as it has a tendency to run 'like mad' (although after some recent adjustments he may actually be slowing down).


Arnold is a black mantel clock made by the Sessions Clock Company. This company began in 1903, after taking over the E.N.Welch Clock Company, and was eventually liquidated in 1970.
Arnold is also in very good original condition and would date from the early 1900s. Like Kendal, he also has an eight day movement, chiming the hours and half hours, housed in a rather austere black painted case. This was the American staple style of clock from the 1850s to the 1920s.

I also have two nice small celluloid clocks that I will put on a future post. Now all I need are a nice wall clock or two and a long case clock to make my clock family complete (but as all collectors really know, is a collection ever really complete?).

Posted by Johnnyfive Collectables at 11:43 pm