Went to Collectorama on Saturday. It's a huge Antiques & Collectables Fair held four times a year, in the Nambour Show-grounds on the Sunshine Coast. Today, being the first official day of winter, meant a cold and dark start for me if I was to get there before the gates opened. You guessed it, I ended up arriving about a half hour after it had started. Still got reasonable parking though and don't think I really missed much.

I spent about three and a half hours looking around, picking up a few treasures and catching up with a few friends here and there. I started with the lower covered area.

My first find was a Salter No. 8 flat iron or sad iron on Ashley's stall. This type of iron aren't rare but they are usually to be found in a rather poor condition. This one (pictured below) was in very good condition and also very reasonably priced. Ashley always has many old irons for sale as he is an avid collector of irons as well as many other metal items. Lately he has been selling of his surplus at bargain prices which has enabled me to add to my own collection of irons which forms an important part of my overall kitchenalia collection. 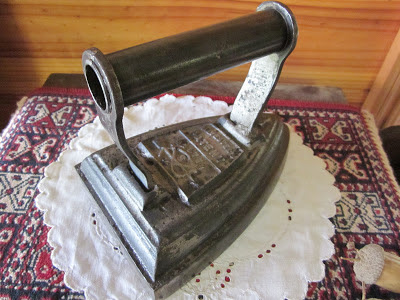 Next I found this tool pictured below. The stall holder said it was for measuring the thickness of sheet metal and the gauge of wire. Not sure if this is correct as I can find no evidence of it ever having any markings on it that would indicate this. I showed it to another stall holder who thought it was more likely to be a special tool used for bending wire. But bending wire for what purpose remains unknown so it looks as though a lot more research will need to be done by yours truly. 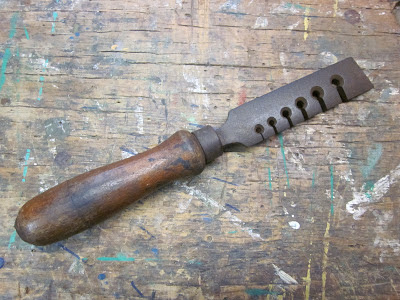 I found another item to add to my kitchenalia collection. This time it was a nice tin mould, maybe for jelly or something similar. Looks a bit like a beetle doesn't it? I believe it is supposed to be some type of fruit shape. 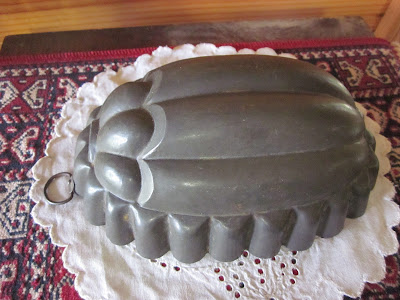 It was time to check out the two storey main pavilion next. You often find some of the better (and unfortunately dearer) items in there.

At one of the downstairs stalls, run by a nice guy from Maleny named Steve, I came across a convict brick with a large impressed heart mark. He believed it to be a genuine convict brick and after a bit of research, I am inclined to agree with him. Looks like another item that will require more research and a post of its own. I had bought some things from Steve before, namely rabbit traps, so knew that his prices were very reasonable to start with and that he was also open to consider any reasonable offers. I noticed that he had a huge circular saw blade on his stall but unfortunately it was already sold. So glad I talked to him about this because he told me that he had another one at home that I could buy. I gave him my card and he said he will bring it along to the next Collectorama in September for me. Don't know how I'm going to wait till then to get it. Hope he doesn't forget and sell it before hand. 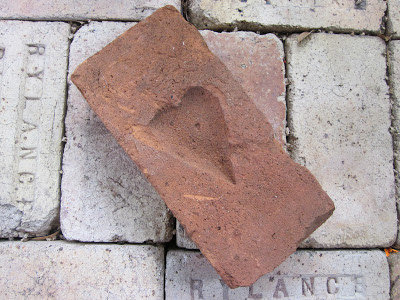 Upstairs in the main pavilion I found the rolling pin shown below. I already had a few rolling pins but none with ends like this one. It's also quite a long one and in very good clean condition. Would be great for making pizza because of its length. Another nice addition to my kitchenalia collection. 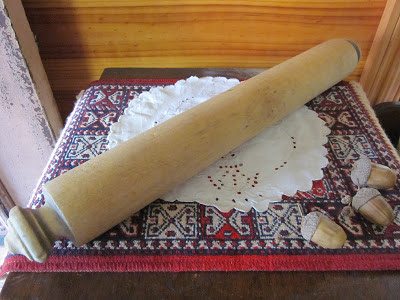 I finished the morning by looking around the other covered area (the split level one) to see what else I could find.

The following two items were both from the same stall in the higher section of the split level area. I was lucky to see them as they had only been put out just before I'd come along (at least that's what the stall holder said). The DeWitt's Antacid Powder tin seems to be over half full but as the lid is stuck firm I have no way of checking this.  It looks as though someone has unsucessfully tried to remove the lid. Still a nice tin with good graphics. Probably dates from the 1950s. 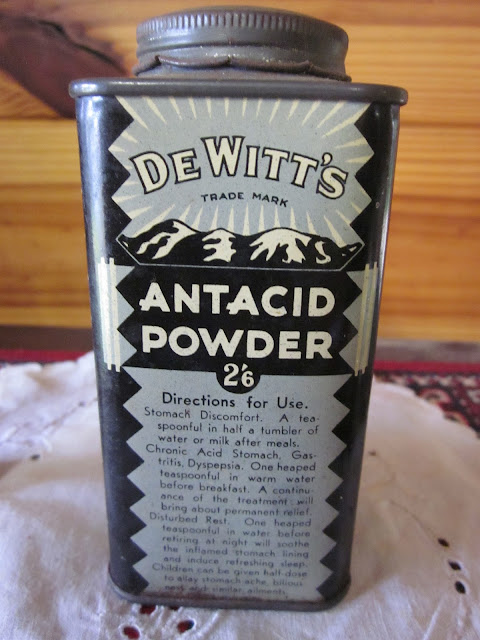 The second item from this stall is a very tiny bottle of Alophen Chocolate Coated Pills (a laxative) with it's original box. It still has six pills left in the bottle. It has a very interesting ingredients list on the label that says the pills contain both strychnine and belladonna. I think the need for constipation relief would probably become a minor secondary problem after taking these pills. 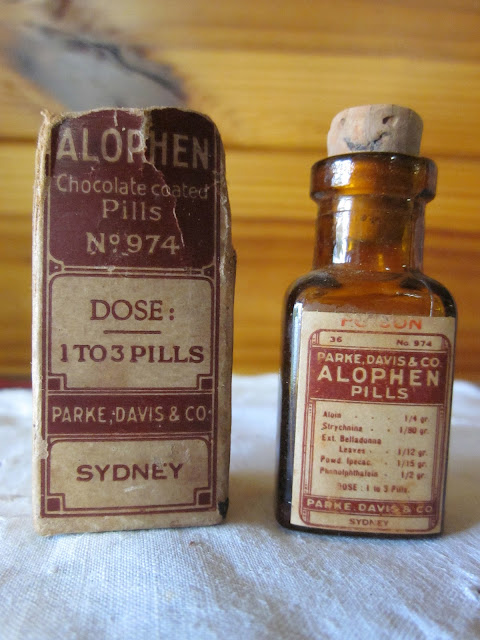 On the same level I also found these two galvanised pitchers. The stall holder believes they were most likely used to bail out the dirty water from washing coppers. As he had about six identical ones (and he said he still had more at home) I am inclined to believe that they would have been used to scoop out feed or grain either on a farm or in a produce store. They are very strongly made and in good condition. I will probably plant them up and use them in my garden somewhere. 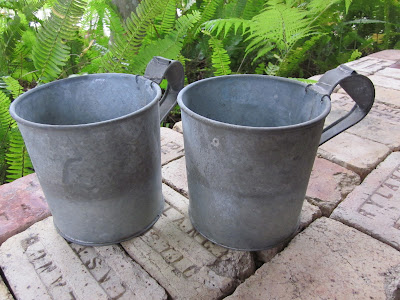 I also found some old Edison cylinder records (nine all up) on this upper level. Their cases weren't in very good condition but all (except for one) of the cylinders were very good. I've only ever had three before so now I have enough to play with when and if I ever get my own Edison Cylinder Gramophone. Also, the stall holder only wanted $10 for the lot which made them even more attractive. 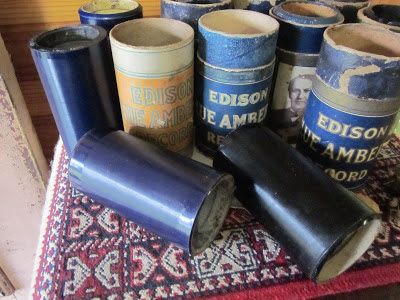 One of my last purchases of the day, found on the lower level, was a child's Puss in Boots plate by Bristol, England. This goes nicely with a child's bowl with similar decoration that I already have from the same English company. 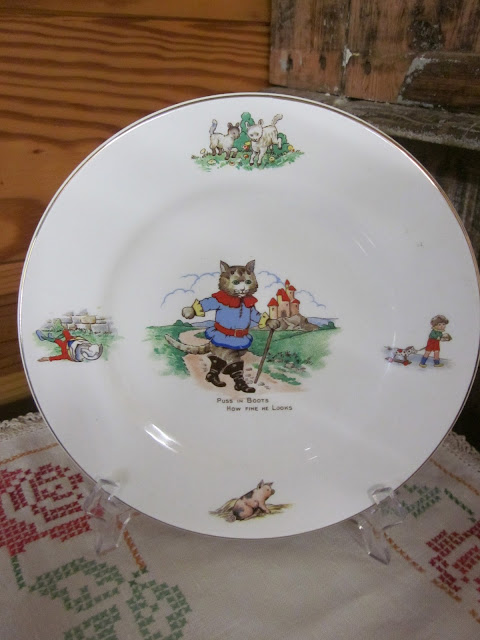 Last but not least was this yellow New Zealand Number plate form the early 1960s. It has already found a good home mounted securely on my shed along with all of my other number plates. Good colour for a 50 year old plate. 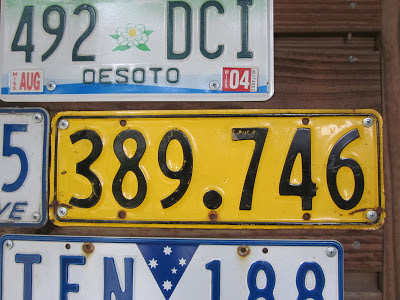 Oh, and of course no visit to Collectorama would be complete without stopping by for a chat and to buy some roasted macadamia nuts from Hamish. His stall turned out to be quite the meeting place on Saturday with George, Fay and Gordon, all from my bottle cub, also turning up for a chat while I was there.

The next event that I am looking forward to is the Caboolture Swap Meet Show & Shine on Saturday the 22nd of June. Never been to this one before so hope it turns out to be a good one.
Posted by Johnnyfive Collectables at 10:39 am