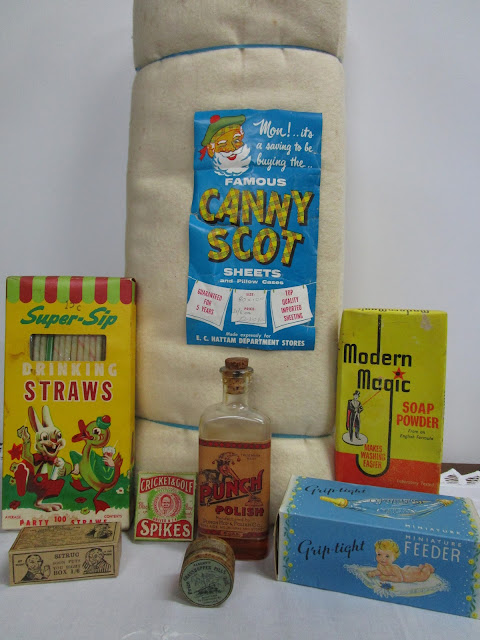 Packaging graphics haven't really changed a lot over the years. They're primarily designed to do one very important thing, and that is to catch your attention. Secondly, their purpose is to give information and a description of what the package contains.

Here are a few from my own personal collection that caught my eye. 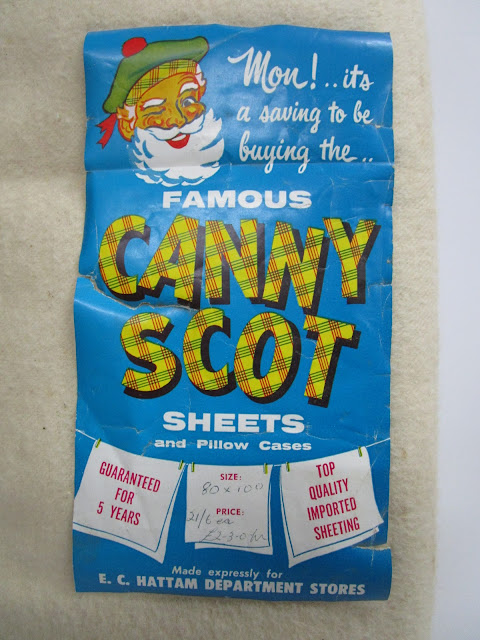 'CANNY SCOT' sheets
Who could resist a smile and a wink from such a happy scot. And the sheets and pillow cases are guaranteed for 5 years, although I think the guarantee my have expired by now. Nice rich colours and attractive graphics.
I believe these would probably date from the early 1960s going by the pre-decimal price of 21/6 each. This set has never been unpacked / untied and the label is still securely attached to the sheets. 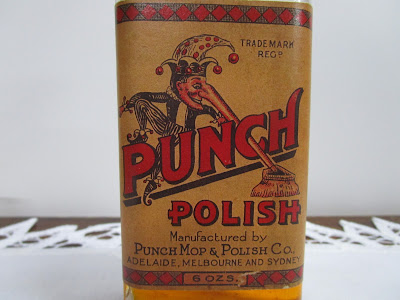 'PUNCH POLISH'
Comical graphics of Mr Punch with a long nose being used as a mop handle. Wonder what lies Mr Punch had been telling?
Unusual to see such an early paper label on a bottle surviving in so good condition. Would probably date from the 1920s.
The 'Punch Mop & Polish Co', Chicago was listed in a 1914 catalogue of copyright entries. It's nice that this fully labeled bottle is actually from Australia and not the U.S. 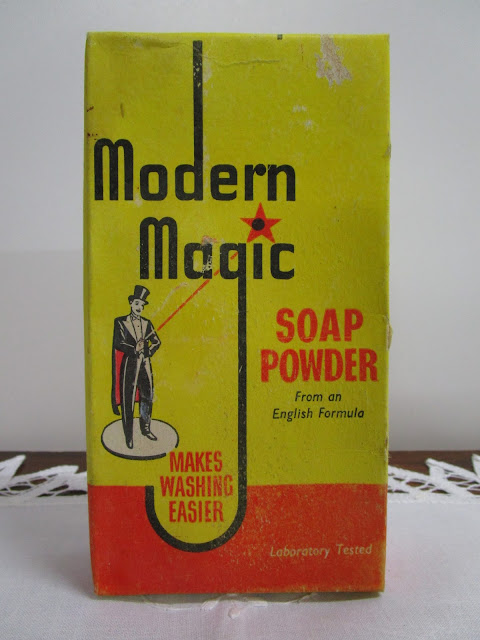 'Modern Magic SOAP POWDER'
Can't tell you much about this packet of soap powder except that it 'makes washing easier'.
Simple clear graphics featuring a magician to emphasise the magic properties of the powder.
Amazing condition for its age. The powder still feels free and loosely packed when shaken.
This packet has never been opened.
If I had to guess it's age, I would say probably from around the 1940s. 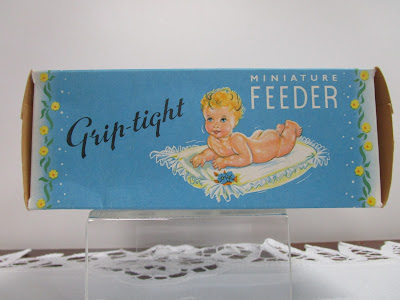 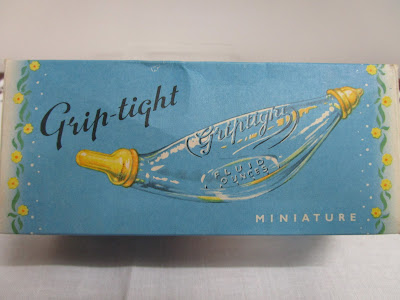 'Grip-tight MINIATURE FEEDER'
Nice cute graphics featuring a naked baby lying on a pretty cushion on one side of the box and the baby feeding bottle on the other side of the box.
The pretty sky blue with yellow flower edging suits the baby theme of the graphics.
This double ended style of baby feeder was very popular throughout the first half of the 20th century. It was a great improvement to the earlier feeders as it could be so easily cleaned.
The box still contains the original unused feeder and would probably date from the 1940s - 50s era. 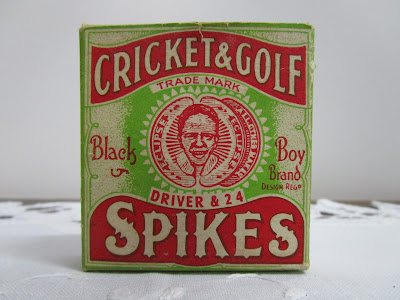 'BLACK BOY BRAND CRICKET & GOLF SPIKES'
Probably politically incorrect these days, but still nice graphics on this Black Boy Brand box of spikes for cricket or golf shoes. I like the font SPIKES is written in.
This box still contains all the spikes but is missing the driver piece and would most likely date from the 1920s-30s. 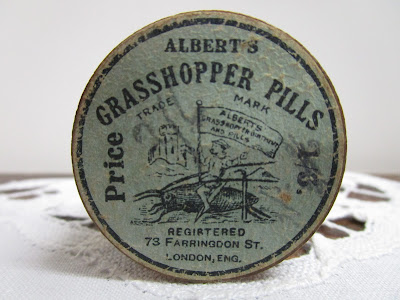 'ALBERT'S GRASSHOPPER PILLS'
I wonder if that is Albert riding on the back of the enormous grasshopper? Why are they named Grasshopper Pills? Were grasshoppers one of their ingredients? I don't think so.
Apparently these pills were used to treat headaches, insomnia, liver, kidney and digestive complaints.
Not sure of when these would date from but suspect they would date from the early 1900s.
This small round wooden box is full of tiny round black pills. Maybe they look like grasshopper droppings! 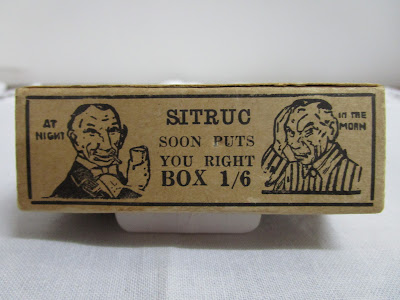 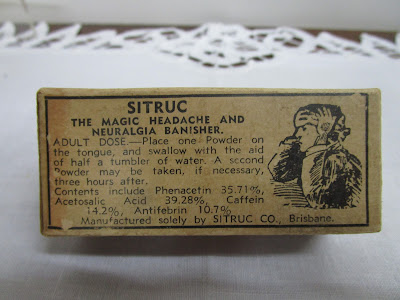 'SITRUC' Headache Powders
Here are some graphics that you just can't ignore. Just look at those faces. Scary. I don't think they must have worked very well if the "in the morn" picture is supposed to represent a cured headache.
SITRUC, which is Curtis in reverse, were made locally in Brisbane, Queensland and sold for 1/6 in the day (15 cents in today's money).
This box has never been opened.
I don't know the age of these but would imagine they would date from between the two world wars. 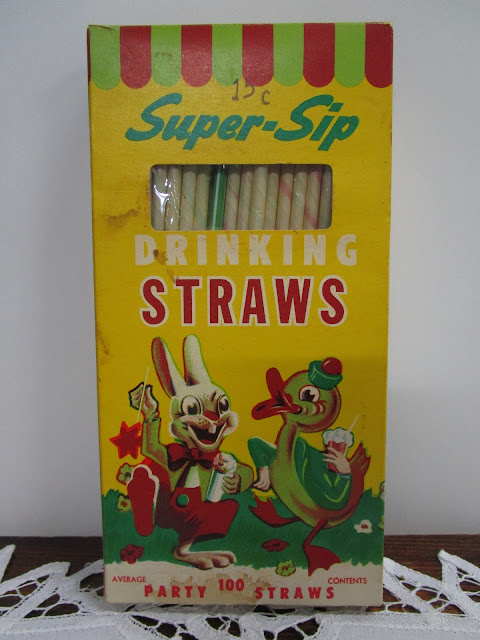 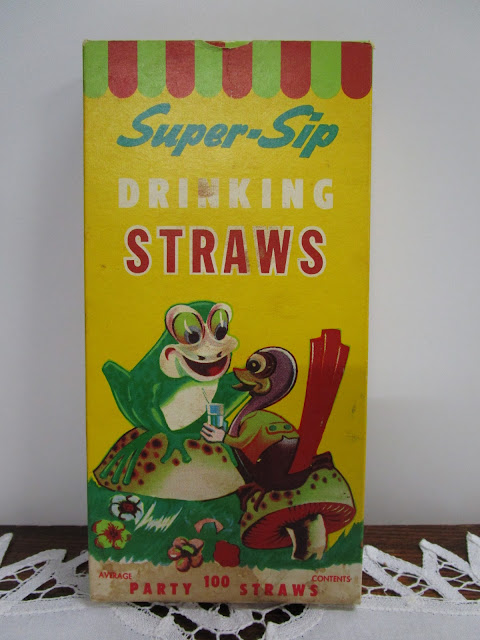 'Super Sip DRINKING STRAWS'
How cute and colourful are these guys? Some very happy little animals all enjoying their drinks through Super Sip straws.
I believe these wax paper straws will probably be making a comeback with the call to ban plastic straws. Sometimes the old ideas are the best ideas.
I would date these to around late 1960s based on the 15c price tag. 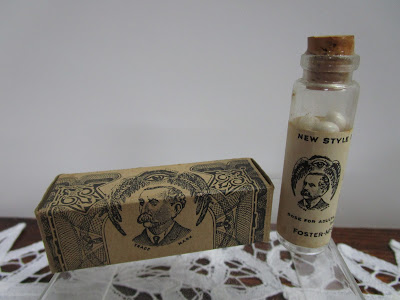 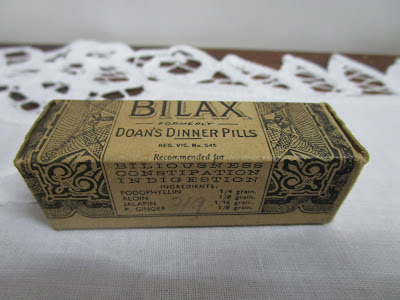 'BILAX - DOAN'S DINNER PILLS'
One more packet with interesting graphics (not included in the group photo).
Rather intricate graphics on this little box of pills - and a little weird too. Not sure what to make of the pair of wings with a single eye in the middle. What does this have to do with laxatives?
If you start researching and collecting old cures and medicines, you'll find that our ancestors seemed to be preoccupied with regular bowel movements.
This bottle is still sealed / never been opened.
This packet of pills probably dates from the 1930s, however I believe they may have still been in production up until the 1960s.


I would love to see some of your favourite examples of vintage packaging. Please feel free to share in the comments section below.

Posted by Johnnyfive Collectables at 2:23 pm