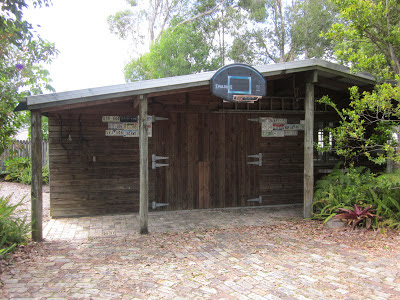 Lately I have been collecting all sorts of rusty stuff and other old things to decorate the outside of my beloved shed. I have been scouring fairs and markets all year for anything that would look interesting. Below are some photos of some of my finds.

The extension ladder was my Dad's. He used it a lot when he was building homes with my Grandfather. Their building company was called "Ron Stevens & Son". I wish I still had one of their tin signs that they would put up on their building sites. The last time I remember seeing them was when Dad and I cut some up to make trays for the bottom of my birdcages when I was probably about 12 or 13. Would love to have one to display on my shed. Might have to make up a dummy one.

The red tub also came from my childhood. I painted it red to protect it from rusting when I sunk it into the ground to provide a pond for my pet tortoise, 'Plonky". I named him Plonky after a similar tortoise we met while visiting friends in Adelaide on our first big family road trip. This was way back in December 1965. I've still got my diary from the trip. Oh, and they named their tortoise Plonky because this was the noise he made when he walked down their hallway. Plonk, plonk, plonk....

I wonder if anyone knows what this large rusty thing is? It was also used by my Dad & Grandfather while building houses. It is a floor clamp. You used it to clamp onto the floor joist and then push the floor boards up tight while nailing them down. If this doesn't make a lot of sense, come and visit and I will give you a demonstration. The sieve was another thing they used.

The rabbit trap above doesn't work but still looks the part and didn't cost much. But I do have some others that are in full working condition. Apparently, so I'm told, rabbit traps can be classified or identified by the different marks on the trigger plate. I have a trap with a spade on it and another with what looks like a trowel. Don't know if this makes them special or not. I just like the look of them hanging on my shed. The two working rabbit traps were found at the last Collectorama fair at Nambour.

The large rusty hook was a Caboolture Market find. I love this hook. I think the chain came from Nana's (my Mother-in-law) place and is probably an old anchor chain. Come and see me if you need to work on your car and lift the motor out.

This is my small collection of horse bits and pieces (bits literally). The horse hames were found at the last Collectorama at Nambour. They don't actually match but look OK together. Horse hames are part of a draft horse harness and are used in conjunction with the horse collar . The stirrups are another Caboolture Market find. They are not brilliant as they are both (I think) for the right foot but they look OK. I really like the horse bit. It is a blacksmith forged piece and was found a few weeks ago at my club's show at Morayfield.
Now for my number plates. I have discovered that you can buy genuine American number plates (or license plates as they call them) quite cheaply on the internet. So this is where most of my number plates have come from. They make a great display. The American plates also have some amazing graphics. Much more interesting than our Australian plates although I do like to have a good mix of both. The top Victorian and Queensland plates came from Karen's Auntie Hazel's garage in Melbourne. The lower Victorian plate came off Karen's car from our time of living in Melbourne.


The top Victorian and Queensland plates also came from Auntie Hazel's garage while the lower Victorian plate came off my Holden Berlina when we were living in Melbourne. I love the Kentucky plate as our house was built by the company called Kentucky Log Cabins. It is also the Bluegrass State and I do love my bluegrass music.
I still have plenty of room for lots more number plates and other rusty junk. Maybe you might have something that you don't want that would look good on my shed. Who knows, I just might be willing to take it off your hands for you (if the price is right). Please let me know if you do.

Posted by Johnnyfive Collectables at 12:08 pm