It's funny how when you find and buy an interesting collectable item, other items in the same theme just keep popping up. This has happened to me recently with fire fighting collectables.

We were looking for  something fire fighting related to give to our eldest son, Laurence (Laurie), as a gift for graduating as a Firefighter with Queensland Fire & Rescue Service. The Sunshine Coast Antique and Collectables show was on so we thought this would be a good place to look for that special gift. This was way back in May this year. Fortunately, we found a nice brass and copper fire hose nozzle at the show. The stall holder happened to be a volunteer fire fighter in a country town a couple of hours north west of Brisbane. We agreed on a price and happily took home our first fire fighting collectable. This was proudly presented to Laurie a short time later.


Laurie had always had a dream of being a fireman, right from when he was a little kid. Now after many  years of hard work, he had now achieved his dream. Well done Laurie. We are very proud of you and your achievements.

The next fire fighting collectable came to me as a gift. A good friend of ours was having a clean up and rang to say she had a few antique things that we might like to have. Of course, I was ready to go straight away to check them out (even though I was rather sick at the time). I didn't want to pass up an opportunity like this and a bit of sickness wasn't about to stop me. 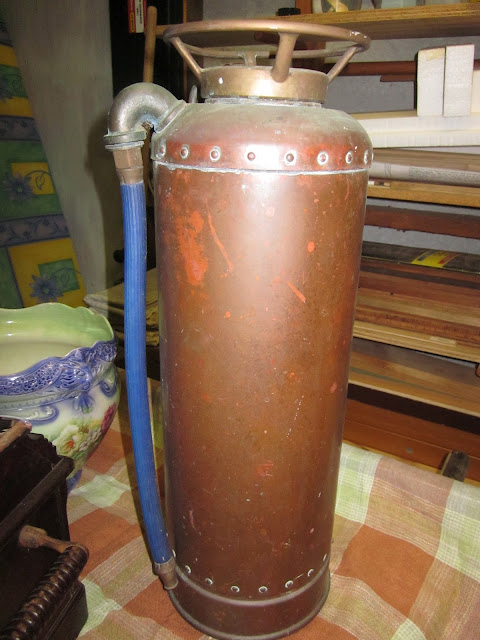 One of the items she had was an old copper and brass fire extinguisher complete with hose and nozzle. I had always wanted one of these but was never prepared to pay the antique shop asking prices. This one needs a good polish but overall is in great condition. Unfortunately it doesn't have any brand name on it.

The third fire fighting collectable find is a fire hose standpipe. I was lucky to find this at the recent Nambour Swap Meet. This was the first swap meet that I had actually attended and I was surprised at the sheer size of it. This meet is put on annually by the Sunshine Coast Antique Car Club.

Standpipes like these are used by firemen to connect into the fire hydrant in the ground. We have one on the footpath in front of our home. Standpipes are part of the standard equipment on a fire engine. This one has a name, of what was probably the fire chief of the station, and date impressed into it in three places. They obviously didn't want any components to go missing. The name is L R GRASSET and the date is 1942. It also has a makers mark moulded into it. The Makers mark is for J. DANKS & SON PTY LTD, MAKERS, MELBOURNE. They have been in the plumbing and engineering business for over 150 years and are still going today. You can read a bit about their history in this link.

Apparently this standpipe is still fully functional. The stall holder told me that his next door neighbour recently used it to connect into a fire hydrant to wash down his house.


What will be the next piece of fire fighting memorabilia to come my way? Perhaps more extinguishers, a fireman's helmet or even a fire truck? Hopefully this collection will end up with Laurie.

Posted by Johnnyfive Collectables at 4:39 pm