Here are two more bricks from my collection.  I bought these almost 30 years ago from a bottle show at The Brisbane Table Tennis Association Hall, Windsor.  Little did I realise at the time that this show was hosted by the Queensland Historical Bottle Club (now known as the Queensland Historical Bottle & Collectables Club) and that almost 30 years later I would be a member of this club.  The Aladdins Antique and Collectables Fairs are now held here 4 times a year.

The first brick is a British brick impressed with "HICKMAN & Co  STOURBRIDGE".  I was told when I bought it that this brick most likely came to Australia as ballast in a 19th century sailing ship.  They would often use bricks as ballast on the way out to Australia and use timber (sometimes cedar) as ballast for the return journey.  The ballast would then be sold at the ship's  destination before the loading of new ballast and cargo.  Are there any buildings in Australia built entirely or partly of British bricks?  Not sure, but it all makes an interesting story.  (I know that Hinkler's home in Bundaberg is built out of British bricks but it was brought out brick by brick and reassembled here in 1983, not sent as ballast in a sailing ship.) 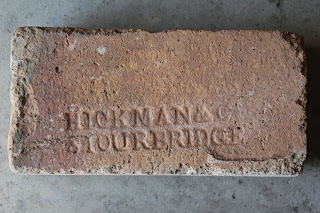 I did find an early reference to this brick on the Papers Past website.  This site has more than two million digitised pages from early N. Z. newspapers from 1839 to 1945.  Just type 'Hickman and Co. Stourbridge' into the search.  The first entry, dating from 1871, is interesting as it talks of a Hickman and Co brick being used in a test comparison with other fire bricks.  It performed really well in the test.  Most references to this brick indicate that they are firebricks so maybe this one came from a kiln or fireplace.

The second brick was bought at the same time.  Don't know much about this brick and not even sure if it is an M or a W impressed into it.  Looks a bit like a snake to me.  There is an example of this brick in Roycroft's Australian Bottle Price Guide Number Four.  It is displayed in the M position in this publication.  The double heart brick in the previous post is also pictured here.  Unfortunately, no detailed information is given of either. 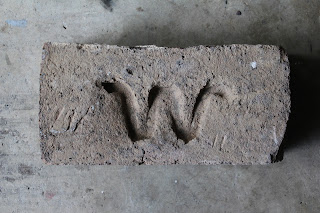 As said before, any information that you can give about any of these bricks would be most appreciated.
Posted by Johnnyfive Collectables at 1:20 pm