My Dad found this for me over 40 years ago at the local tip (dump).  They were the days when you often came home with more rubbish than you went to get rid of.  If you want to take something home from the tip now you have to buy it from the tip shop.  This frame is an example of one person's trash being another person's treasure.

I immediately saw the value of the silky oak frame and took the postcards out so I could use it for another purpose.  Thankfully I put the postcards away safely and then proceeded to use the frame to house a cheap print of the right and wrong way to dismount from a tram.  It stayed this way for the past 40 years.

Last weekend I decided to restore the frame to its former self.  I gave the frame a quick polish with some Franklyns Furniture Polish and cleaned the glass.  I found the original Gladys Cooper postcards amongst my postcard collection and remounted them in the frame behind the original mount board.  There was a small amount of damage to the mount board but nothing that a bit of grey Staedtler Fineliner  pen couldn't fix.  All that was left to do now was to seal the back with picture framing tape and replace the hanging wire.  I can highly recommend using good quality picture framing tape.  All you have to do with it is moisten the gummed side and apply it over the gaps in the back of the frame.  Very easy and quick to use as well as being very strong.  It now hangs proudly in my office (come museum collectables room). 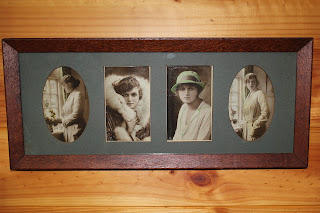 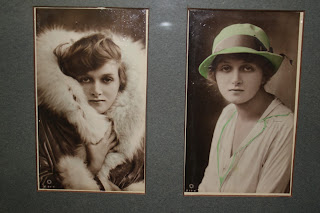 Gladys Cooper was an English actress whose career spanned seven decades on stage, in films and on television.  She was born in 1888 and died in 1971.  She actually played the role of Mrs Higgins in My Fair Lady (1964) for which she received a nomination for an Academy Award.


Many postcards showing Gladys Cooper are available and so are not worth very much at all but they still look great displayed this way.  Each postcard is a real photograph that has been hand tinted and were all sent to Maud from Nellie (as per the inscriptions on their backs).  I suppose they would date from the 1910s to the 1920s (they had no dates on them).
Posted by Johnnyfive Collectables at 10:57 am