My Birthday Visit to the Historical Brisbane Home MIEGUNYAH

Last Sunday was my 60th birthday. Not being a huge party person, I decided it would be nice just to have a quiet day out with my family doing things that I enjoy. So a visit to "Miegunyah" and the "Windsor and Districts Historical Society" was planned. It had been about 38 years since Karen and I had been to "Miegunyah". Throw some yummy food, such as a Devonshire Tea and lunch at Subway, into the equation and you have what to me seems a great day out.

We left early so that we could arrive at "Miegunyah" just when it opened. Unfortunately, I didn't check the opening times before we left and we turned up half an hour early. At least we weren't late. Thank goodness for electronic devices such as laptops, iPads and mobile phones to while away the spare half hour. 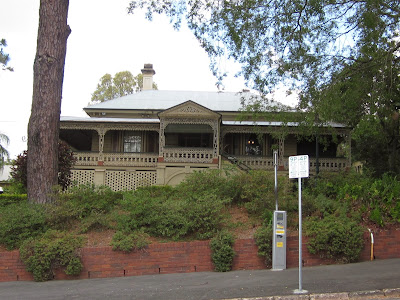 "Miegunyah", an aboriginal word meaning 'my house', is a heritage home from the late Victorian period, now owned by the Queensland Women's Historical Association. It was built in the 1880s and is located at Jordan Terrace, Bowen Hills in Brisbane. It was purchased by the Queensland Women's Historical Association in March 1967 and opened as a house museum in June 1968. "Miegunyah" is on the Register of the National Estate, on the Queensland Heritage Register and classified 'A' by the National Trust. It is considered to be a particularly well preserved and fine example of a typical large Queenslander built in Brisbane in the last quarter of the 19th century. You can read more about "Miegunyah's" history here.

We were met at the door by our guide, a lovely lady named Marita, and invited into the entry hall. Marita's guided tour of the home bought everything to life. She knew the home's history well and many other interesting things about how the former residents would have lived. Although I have been interested in antiques and their history for most of my life, I still learnt many new things from Marita. For example, the numerous starched collars that a man would keep in a leather collar box on his dressing table were not just a fashion fad (as I thought) but were changed daily out of necesity because he would be wearing the same shirt possibly for the whole week. This fact, accompanied with only bathing once a week, would have resulted in a shirt with a very grimy collar, hence the solution of having a number of detachable collars instead. A guided tour is a must if you ever visit "Miegunyah".

Below are a few overall photos I took of some of the rooms in "Miegunyah".


The following photos show some of the other things you can expect to see on your visit.

We ended the morning with a yummy Devonshire Tea on the front verandah of "Miegunyah", overlooking what would have once been part of a large country estate but what is now inner city Brisbane suburbia.


A few more photos before we leave. 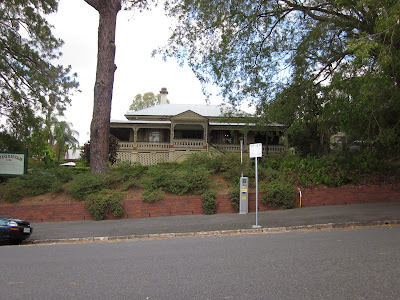 A big thanks must go to Marita and Marilyn for their very warm hospitality and also to the 'Queensland Women's Historical Association' for the fine job they have done in preserving a beautiful piece of Brisbane's history.

Now off to the "Windsor and Districts Historical Society", but that's another story.
Posted by Johnnyfive Collectables at 9:22 am